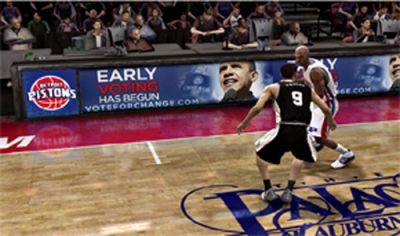 The common misconception is that In-Game Advertising is a type of advertising all on its own, with just one price-point – which isn’t the case. There are a few different types of in-game advertising, and below we’ll outline each type. We won’t go over in-game advertising pricing and costs, but if that’s what you’re looking for, please go to this article.

Dynamic In-Game Advertising can be integrated into games for the Xbox 360, PS3, Nintendo Wii, Mobile, and Online Games.

Static In-Game Advertising is another type of in-game advertising, which is programmed directly into a game. It’s integrated into the storyline of a game, and is done so during the development of the game. It can be compared to product placement in movies or television, so once static in-game advertising is put into the game, it’s there to stay forever.

Preparing for Static In-Game Advertising isn’t so easy as sending over your company’s banners to the advertising vendor. It often requires the game developers to custom-build your product/brand into the game’s virtual environment. An example would be a skateboarder in a skateboarding game, wearing a certain brand of shoes throughout the entirety of the game. Or another example would be having a McDonald’s inside the same skateboarding game, and having the skateboarder interacting with the McDonald’s – perhaps riding around the store for example.

Similar to above, Static In-Game Advertisng can be integrated into games for the Xbox 360, PS3, Nintendo Wii, Mobile, and Online Games.

Advergaming is the type of in-game advertising where fully function games are developed for the sole purpose of promoting a company, brand, or product. Advergaming is probably the most difficult to prepare for and launch, but can heavily pay-off if done well.

Advergames are great for companies who have the means to tie the advergame in with a promotion, or can promote the game via other advertising channels.

Advergames can be created for just about any gaming platform including consoles (Xbox 360, PS3, etc), mobile, online, and more.